Once you get past the long tailpipe argument against electric vehicles (EVs), you’ll often run into the assertion that a flood of EV adoption will threaten to bring the US electrical grid to its knees.  It certainly sounds scary, but how much truth is there to it?

While the transition to EVs will over time, call for grid modernization, nothing is collapsing anytime soon. This graphic below shows EV loads at the seven Independent System Operators (ISOs) in the US in 2015. It’s clear that the EV-related load is minimal–even in EV-hungry California, EVs represent about 0.15% of load.

In fact, if we take a close look at the actual load profile for CAISO (the ISO for California) from a day back in September 2015, we can see the EV-related load barely registers.

OK, so no imminent catastrophe, but how about in the future when all those Model 3s are running around?  A 2007 FERC study concluded:

The existing electricity infrastructure as a national resource has sufficient available capacity to fuel 84% of the nation’s cars, pickup trucks, and SUVs (198 million) or 73 % of the light duty fleet (about 217 million vehicles) for a daily drive of 33 miles on average.

The latest Annual Energy Outlook from the Energy Information Agency, models battery electric vehicles (BEVs) representing 6% of light duty vehicle sales or about 1 million vehicles annually by 2040.  Even with this growth, transportation remains a minor source of electrical consumption (the chart below includes total residential consumption for comparison). 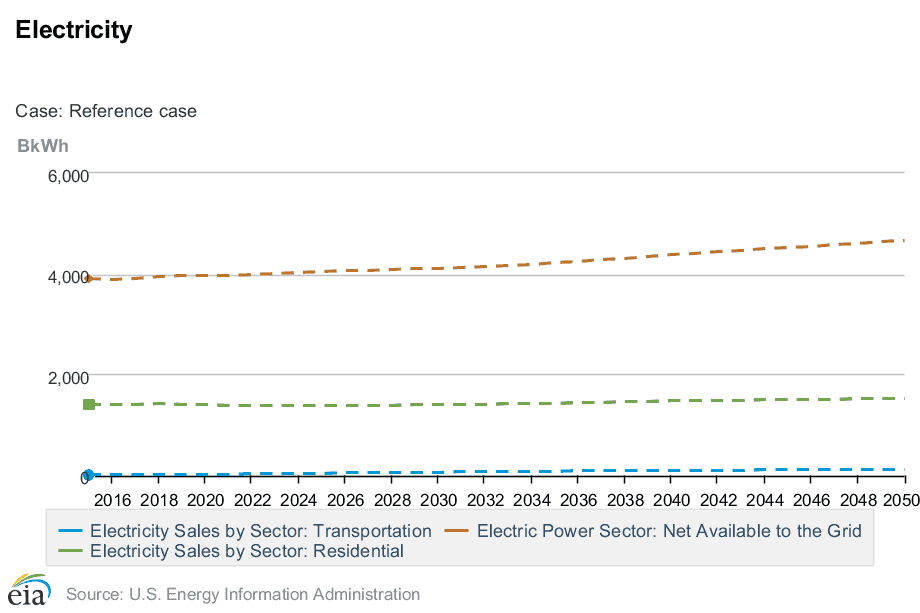 Again, lets take a closer look at California, since the site has the largest EV population and can serve as a canary for other regions. The Rocky Mountain Institute (RMI) modeled the CAISO grid load if California hits its goal of 1.5 million EVs by 2025:

If we want to be a bit more aggressive, Goldman Sachs has predicted a 37% compound annual growth rate for EV sales for the next 15 years, which would translate to 23% of all cars nationwide being EVs by 2031.  For California, if 23% of cars were EVs (~6 million cars), RMI predicts the load map will look something like this:

Still not going to crash the grid, but I would hope my utility might be making some plans.  :).  As we will see in the next section, your utility has been making plans and has levers it can pull to partially or fully mitigate the impact of charging on their grid. Moreover, some of their options can improve the health and reliability of the grid to boot!

Now that we have put the whole “crash the grid” thing to bed, lets ask some better questions. When it comes to assessing capacity to support EV charging, two questions that really matter are “where” and “when”?

Charging is really a local issue.  I don’t really care if CAISO is in good shape, I want to make sure my utility and the equipment feeding my house are in good shape.  As we are in the early days of EV adoption, clustering is still a concern.  EVs purchases are not spread out uniformly across a service area, but are rather concentrated in certain neighborhoods.  This clustering can tax the equipment servicing those areas causing the utility to upgrade the equipment.  The question is how big a concern this is. Research by the Electric Power Research Institute concludes “The short-term impacts for most utilities should be minimal and localized.”  Michael Kuss, and Engineer at the National Renewable Energy Lab offers a similar assessment:

In most of the scenarios we’ve explored, electricity distribution transformers have enough excess capacity to charge PEVs…In fact, most usage scenarios show that PEVs may actually benefit the utility grid.

A 2014 PUC filing by San Diego Gas & Electric bears this out:

Of the 97,350 vehicles estimated to be currently on the road, only 126, or 0.1%, have required a service line and/or distribution system upgrade. Further, PG&E and SCE have completed more than 14,639 residential infrastructure checks related to PEVs and only 115, or 0.8%, of the checks identified the need for an upgrade. In all but 20 instances, the allowance for residential service upgrades was sufficient to cover the portion of the service upgrade cost that is assigned to the utility.

Looking a bit further down the road, the Sacramento Municipal Utility District did in-depth modeling based on projections of the California Energy Commission, which forecast 240,000 EVs on in the SMUD service area by 2030.  They concluded that up to 17% of their transformers would need to be up upgraded by that point in time. However, the upgrade costs worked out to a relatively modest $100 per EV and the influx of new EVs concurrently opened up a significant new source of revenue for them.

This is a good time to note that utilities have both time and money on their side.  While EV adoption is growing, the transition will still be measured in decades and that gives utilities time to both plan and execute. Because of the distributed nature of adoption, utilities don’t need a massive up-front investment; instead, they can target and prioritize grid modernization based on where EVs are being adopted and where they will be receiving new revenue (from EV charging).

Public Service Announcement: if you buy an EV, call your utility: first, they can tell you about any special EV rates, rebates, etc and second, it also helps their planners decide where they need to upgrade equipment.

The other relevant question related to charging is “when” you charge.  While I’ve shown that EV load is incremental, the fear is always that it is just enough to push the grid over the edge during the evening hours when everyone comes home from work, cranks up the air conditioning, starts making dinner and plugs in their EV.

Its worthwhile noting that a study done by Pecan Street Research challenges this conventional wisdom.  Their research showed that participants left to their own devices only did 22% of their charging during peak hours.  While this is well above the 12% of charging done by owners participating in a pricing plan that incented off-peak charging, it’s still well below most behavioral models which assume most owners will plug in as soon as they get home.

Amongst their levers to influence behavior, utilities have something called time of use (TOU) pricing, which has proven to be a remarkably effective tool in driving owner behavior.  Typically, utilities have charged you the same price for your electricity regardless of what time of day it is. With the advent of smart meters came the possibility of TOU pricing, where you are charged a different rate for electricity based on the time of the day. The theory is that you will want to lower your monthly electric bill by doing things like dishes, laundry, car charging, etc at times where electricity is cheaper.  Here is an example of the TOU rates for my utility:

As you can see, there is a significant cost difference between charging in the evening ($0.31/kWh) and overnight ($0.07/kWh) and this delta is why TOU rates are effective motivator. I’ll tell you, I can count on one hand, the number of times I have charged during the day in the last year. The chart below shows the changes in charging patterns that Progress Energy created with TOU rates: 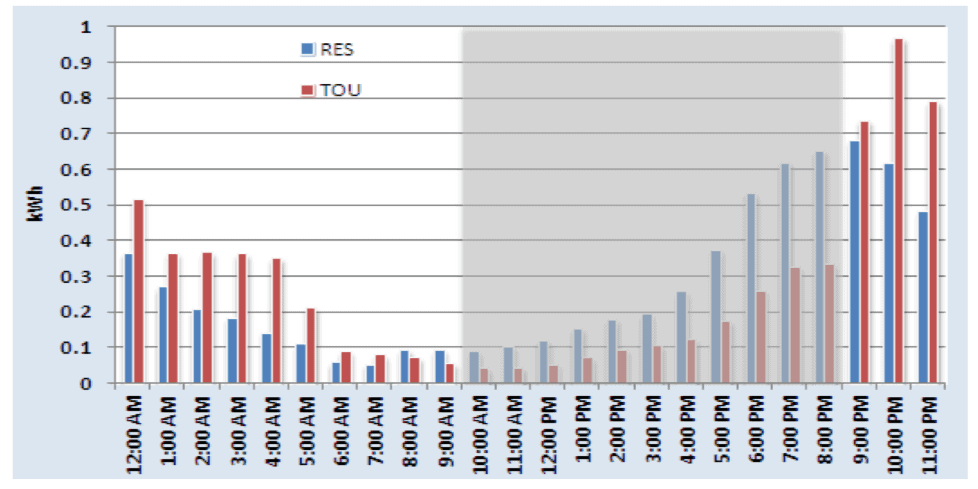 This second chart shows charging behavior for two Florida utilities, one with TOU rates and one without:

So, we can see that TOU rates are an effective tool to shift charing behavior and not exacerbating peak load on the grid, but is that enough?

While TOU rates are effective, they are still a pretty primitive tool.  For most utilities they are based on voluntary compliance and it still makes it hard for utilities to model and predict loads as they are still not sure when you might actually charge.  Enter the concept of managed charging.  With managed charging, your utility can communicate directly with your home charger (or your car) and coordinate charging activities.  Why would you want to cede control of your vehicle charging to your utility?  Probably because they will make with your while financially.  The pitch will go something like this:  you tell us by when you want your car charged and how much and we will make sure it happens–in return, we get to control when your car charges and how fast, and as a sweetener, we’ll charge you less for the electrons.  In addition to managed charging at home, utilities may encourage “opportunity” charging where they incent you to plug in whenever you park, regardless of how long.  Having your EV is plugged in the middle of the day (either at home, at work or on the go) is as a way to soak up any excess capacity from wind and solar generation during daylight hours.  The goal of both of these strategies is to better plan align generation to demand and to smooth out peaks and valleys.

While this might seem novel now, by 2050, NREL predicts 45% of charging will be managed.

So, if you go back to the original RMI models and apply the charging optimization techniques we have just discussed, we get a load curve that looks like this:

This is with the same 23% penetration shown earlier, but you can see the increase to the afternoon peak has been greatly reduced and the EV related loads shifted to mid-day or night-time.

Further down the road, there are industry experts advocating for even tighter integration of EVs into the electrical grid with a concept called Vehicle to Grid or V2G. V2G takes advantage of the fact that EVs spend most of their time parked and if they are grid connected they can help with things like soaking up day time over-generation from sources like wind and solar, delivering supply back into the grid during times of high demand and providing ancillary services like frequency regulation. V2G and similar concepts benefit utilities with a more stable and resilient grid and EV owners with financial compensation for the use of their EV.  While promising, V2G is just at the proof-of-concept stage and it will be years before we see if they actually pan out.

The bottom line is this:  yes, EVs will have an impact on the grid, but no, it not going to be catastrophic.  The impact will be incremental and it will play out over many years. Utilities have both the time, the tools and the financial incentives to adapt the grid to support the growing EV fleet.