A commonly repeated myth about EVs is they really don’t have lower emissions because the run electricity from dirty sources (the long tailpipe), are more resource intensive to build, or similar comparison. An intellectually honest answer to this would involve doing whats called a well-to-wheel analysis of EVs and gasoline-powered cars.  Since thats a bit involved, let me cut to the chase and then dig into the details later.

The Union of Concerned Scientists have an on-going effort to look at the wheel-to-well emissions of both EVs and conventional cars, correlate the grid mix (sources of electricity) for a given grid region and convert the info into an easy to understand rating.  Here its the latest from them:

The rating for each grid region indicates the EPA MPG rating you would need for a gasoline car to beat the emissions of an EV charged using the the grid mix on for that region.   As an example, in California, you would need a gasoline car with an EPA rating of 95 MPG to have a lower emissions footprint than an EV.  As a point of reference, the average EPA efficiency is 25 MPG.

As of this writing, if you live in Colorado and drive a base 2017/18 Mitsubishi Mirage with an automatic transmission, congrats, you have a lower emissions footprint than your follow EV-driving Coloradoans.  At least for this year (as we will see later on, the grid is getting cleaner every year, so next year, this might not be the case).  For most of you, however, an EV (or at least a hybrid) is going to be a better choice from an emissions perspective.

You can find the original 2012 UCS report here and the updated data here. Finally, if you want to get specific details for where you live or for a particular car, the UCS have a handy tool for that. 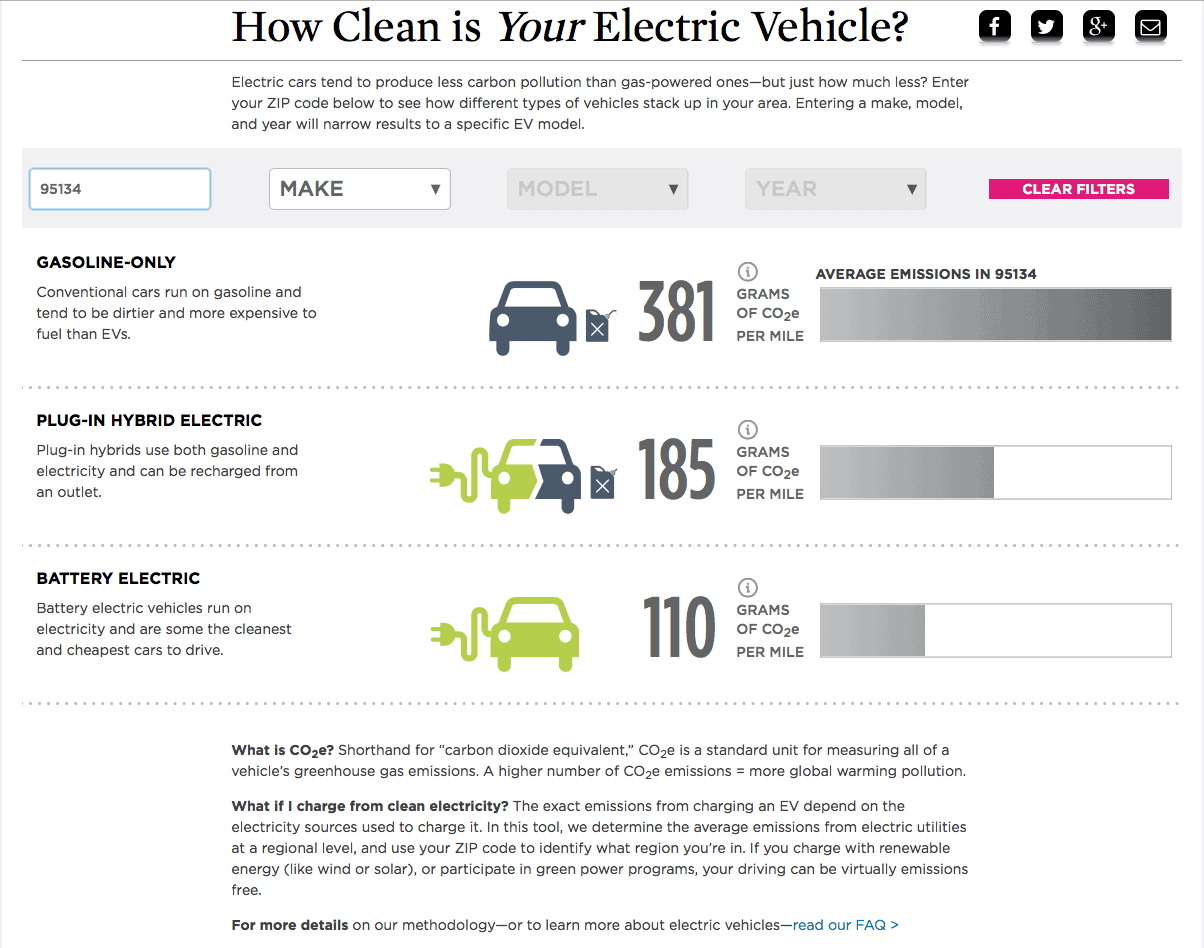 Let’s work through the long answer in a couple of steps, first let look at the wheel-to-well analysis, touch on efficiency and then wrap up with the electrical grid and the grid mix.

As I noted earlier, the only way to have an honest comparison between EVs and gasoline-powered cars is to look at emissions from well to wheel (WTW).  After all, neither the gasoline in you tank nor the electrical charge in your EV battery magically appeared there. That’s what well to wheel analysis endeavors to do–look at the impact of the entire chain of events and activities that results in the wheels of your car turning.

The US Department of Energy Alternate Fuels Data Center defines well to wheel as:

“includ[ing] all emissions related to fuel production, processing, distribution, and use. In the case of gasoline, emissions are produced while extracting petroleum from the earth, refining it, distributing the fuel to stations, and burning it in vehicles. In the case of electricity, most electric power plants produce emissions, and there are additional emissions associated with the extraction, processing, and distribution of the primary energy sources they use for electricity production.”

Foraging through the AFDC data, we can look at three illustrative WTW scenarios: California (clean grid), West Virginia (dirty grid) and the national average (you can pull up details for your state on this site).

The AFDC data correlates the findings by the Union of Concerned Scientists.  Even with the coal-heavy grid of West Virginia (97%!), an EV is still less polluting.  The underlying assumptions for the three scenarios can be found here.

A lot of the seminal work on WTW has been done by Argonne National Labs’ Energy Systems Division. Their GREET Model yields similar results:

If you really want to dive into the topic, read the Argonne National Labs white paper published in 2010.  While some of the data and conclusions are now dated as markets and technologies have evolved, the paper does provide an in-depth look into the underlying elements of WTW and the evaluation methodology.

One of the interesting things the GREET chart reveals is the role of efficiency in WTW emissions.  If you look at the WTP numbers for gasoline, they are not horrible; instead, most of the emissions occur between the tank and the wheel (PTW).  This is because internal combustion engines are so inefficient–only about 14% – 30% of the fuel put into a car helps move it done the road, by comparison its 74%-94% for EVs.

This is an intrinsic problem with any internal combustion engine when it comes to WTW efficiency.

Cleaning Up the Grid

Since we have established the grid mix has an important role, let’s take a closer look.  So, where does your electricity come from? Here is a chart from the US Energy Information Administration looking at major sources of electricity in the US for the last 10 years: 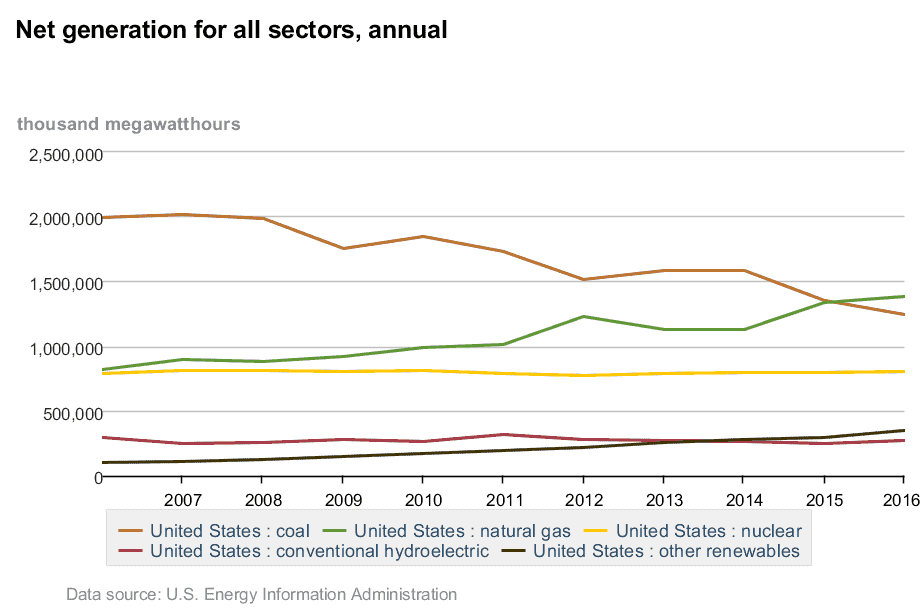 There are three trends worth noting:

You may be asking, aren’t coal and natural gas both fossil fuels? Well, yes, but all fossil fuels are not created equal, and while natural gas may not be ideal, it is an improvement over coal. As a Department of Energy analysis notes

These aggregate improvements over time are quite meaningful.  Let go back and look at how the UCS map based on the EPA’s eGRID data has changed over time:

You can clearly see a consistent and steady greening of the grid over time and its reasonable to expect this trend to continue: 1) there are good business reasons for moving from coal to gas, 2) there are state-level renewable energy goals in place…

…and 3) the contribution of renewables continues to increase.

One final thought: the long-term greening of the grid is important because it retroactively benefits the entire EV fleet. A 5-year-old EV is probably cleaner today than the day it was bought, which is the opposite of gasoline engines which only get dirtier as they age.

One Reply to “EV Emissions: Yes, They Are Better for the Planet.”