A common question about electric vehicles is about how long the EV batteries last.  Folks are genuinely curious about lifespan and, as the battery pack is typically the single most expensive component in an EV,  it’s a good question to ask.  While the dinosaur juice crowd will paint a dystopian vision of landfills overflowing with dead EV battery packs, you probably won’t be surprised the truth is much, much less dire.

How Long Will My Pack Last?

A bit of background is in order.  The current go-to chemistry for EV batteries is some sort of lithium ion formulation.  All Li-ion battery capacity degrades over time, meaning that the maximum charge they can hold decreases over time. Manufacturers can take steps to reduce the rate of degradation–and Tesla has some of the best battery management features available–but they cannot escape it completely.  If we acknowledge pack degradation is part of EV life, the question really becomes whether degradation a meaningful concern.

Right off the bat, we can state that the most dire projections of  pack failures after a couple of years of service proved to baseless (I know you are shocked). The Nissan LEAF was introduced in 2010 and the Tesla Model S was introduced in 2012 and there have been no large-scale, widespread pack failures for either car.  If there were, trust me, you would have heard about it.

In fact, the data we do have access to is pretty promising.  Plug-In America have been running longitudinal study of Model S battery capacity with some interesting results.  If you are really interested in the data, they publish some interesting charts and you can download the data and play with it yourself.

Here is a snapshot of the aggregate Model S Data: 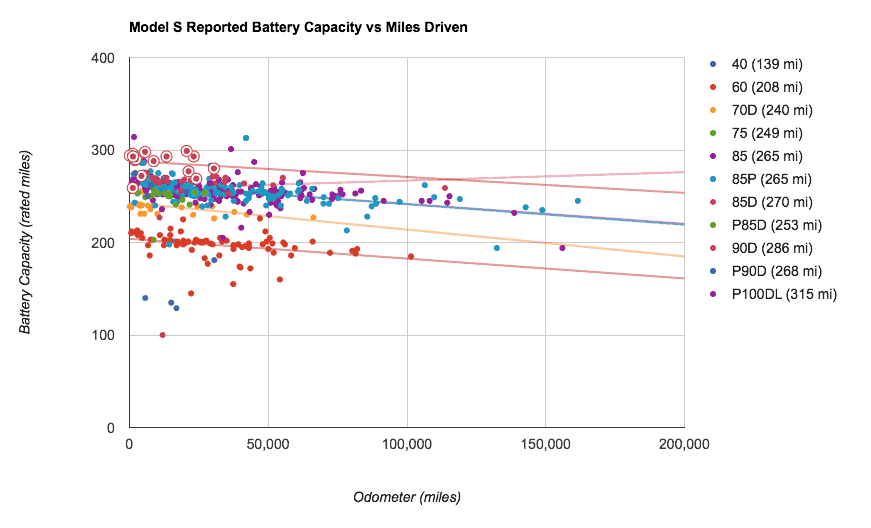 I isolated the data for the early 85 kWh models (S85, single motor P85, P85+) because they are comparable to the size pack you can buy today and they have to most data available. 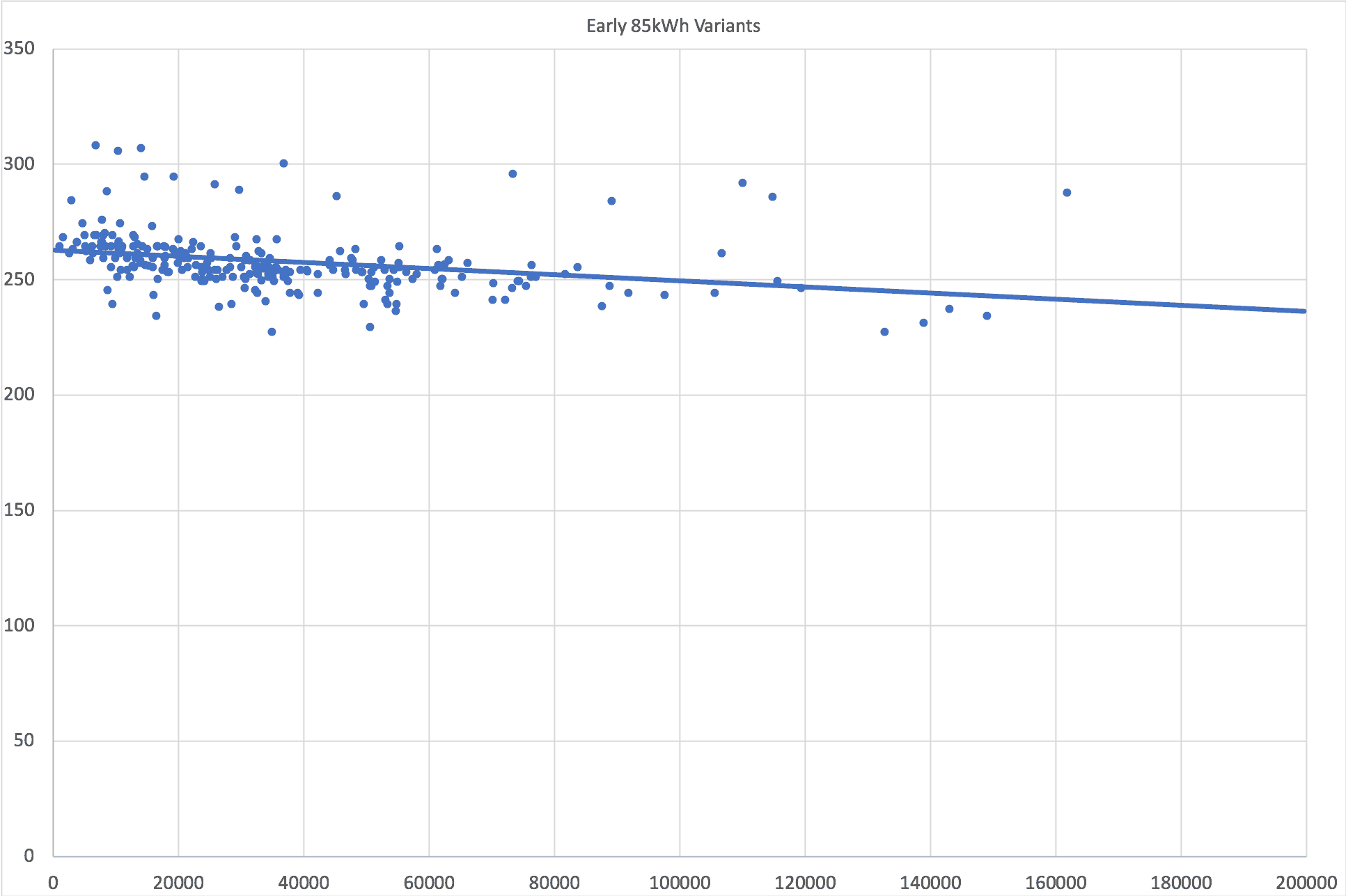 Applying simple linear trend line, you see that you can reasonably expect a car with 200,000 miles on the odometer to charge to ~240 miles of rated range or ~90% of its original range of 265 miles.  My personal experience bears this out–my P85 tops out at 250 miles at 100% charge with ~100,000 miles on the odometer.  Now you can understand why Tesla is comfortable with their 8 year, unlimited mile battery warranty.

Let’s look at this another way. According to the Department of Transportation, the average driver travels ~13,400 miles each year or about 15 years to hit the 200,000 mile mark.  IHS Markit reports that the typical owner keeps a new car for 6.6 years and used cars for 5.5 years and the average age of a car in the US is 11.4 years.  The means that the third owner of that Model S might want to start thinking about a new pack.

Here is one more analysis done by the a Dutch-Belgium Tesla owners group that covers a broader range of models. Their data suggests a degradation of ~1% of capacity per 30,000 miles:

So, you pack is going to eventually drop below a useable capacity.  Now does it head off to the landfill? No.

Packs that are no longer suitable for automotive purposes (typically 70-80% of original capacity) are still useful for other energy storage applications.  Bloomberg New Energy Finance (BNEF) predicts repurposed EV batteries could cost $49 per usable kWh versus $300 kWh for new batteries.  The National Renewable Energy Lab (NREL) predicts that facilities that specialize in a specific pack can get costs down to $20 kWh (some great links at the end of that article for folks wanting to dig deeper).

Repurposing or “second use” applications, potentially deliver the proverbial “win-win”:

There are a number of companies that are looking at repurposing used EV cells (or whole packs) for grid storage applications. Several manufacturers (BMW, GM, Mercedes-Benz, Nissan, Toyota and others) have pilots underway and a  number of startups are entering this nascent space.  There are still a number of outstanding technical and business hurdles to EV battery pack repurposing but there are also significant investments of time, money and resources being made to make it happen.

The End of the Road

Alas, sooner or later, EV packs are no longer usable, even for repurposed applications. Now does it go to the landfill? Sorry, the answer is still “no”.

EV battery packs are full of valuable metals so there is a strong financial motivation to recycle Li-ion batteries and recover those metals.  There are a number of companies recycling Li-ion batteries. Ironically, they are not being recycled for their lithium. While Li-Ion is 100% recyclable, for many companies its not cost effective to use it in the manufacture of new batteries and instead the recovery of nickel and cobalt is driving the recycling of batteries.  While the lithium is being recovered, it’s primarily being used in non-automotive applications.

As demand increases and supplies tighten, economics will shift and recycling will become a critical component in a sustainable supply chain. Brian Jaskula, a lithium expert with the US Geological survey noted that 10 to 15 years from now, when those 400,000 Model 3s start retiring, the economics of recycling Li-ion batteries for the lithium become appealing.

You might have noticed I did not mention Tesla earlier in the list of manufacturers working on pack repurposing.  The reason for that is Tesla is putting all their efforts into EV battery pack recycling instead and committed to a closed loop battery manufacturing process.  It aligns with the company ethos and they feel it makes long-term business sense.